Coming off of a very fun (but swelteringly hot) kickball game of the Summer of 2016, our Development team of around 30 odd developers, testers, and devops engineers was in need of a good team building exercise for 2017.

Don’t get me wrong, we are a team that knows how to have fun (twice annual hackathons, a fully furnished Leinie Lodge meeting room complete with functioning keg, popcorn delivery service, a 3D printer just for fun, and on and on…)

However as most people spend a majority of their existence on long-term product teams, or building our platform and services in AWS, many express a desire to get to know the people on their fellow teams better and feel more like we are one big, cohesive group.

Coming up with a good team-building exercise for a group of this sort can be… challenging. Invariably some subset of people are not going to have a good time. Sports activities like kickball and hiking are always a great standby, but engineers are not exactly known for their physical prowess.

I wanted to come up with something that would engage the team across the board, but sufficiently differentiated from our hackathons, which tend to focus on software innovations. I wanted something that would force people to learn something new together, but at the same time, use skills that were familiar and already powerfully developed.

Somewhat selfishly, my thoughts turned to the many cool hardware toys I had been seeing coming onto the market over the past several years, Arduinos, Raspberry Pis, and the larger Maker movement that had manifested itself into Maker Faires all across the world. I had always wanted to find a good excuse for getting one of these devices, but alas time is precious and hard to come by and I had not yet pursued anything.

The idea of forming a team building exercise out of physical components and code was very appealing, but could a software team like ours really figure out enough to make these devices go over the course of a single day? What if someone with no experience soldering burned themselves? What if a team’s project was turned into a pile of smoking electronic junk early in the day and they had nothing to do for the rest of the day? And would the company even support me in buying up all of this electronic stuff with no real tie to our actual products?

I decided to set these concerns aside and leave it up to fate. Maybe we would end up with some spectacular failures, but we would find a way to have a good time together and learn for next time.

With the approval from the powers that be, I announced to our team on June 29th that we would be taking part in the inaugural Widen Maker Day, to take place August 10th. The rules were pretty simple. People would be assigned into each of 6 teams. Each team had a budget of $200. The instructions were to build something fun and interesting using a combination of physical hardware components and code. Existing macbooks, monitors, AWS resources, etc. were fair game.

Fast forward to July 26th, the deadline for teams to order components. I was getting worried. Had the teams actually discussed their plans? Had they planned out everything they needed? We don’t have hardware engineers, did they even know what they needed? I certainly didn’t know what the hell I was doing. As part of a project team myself I quickly became lost looking at cryptic hardware diagrams. I might as well have been looking at hieroglyphics. I have put several computers together over the years, but had done nothing this low-level. I suggested people buy pre-made kits and look at the projects laid out on adafruit.com.

But in came the orders from each team, and I went on a shopping spree on amazon.com and adafruit.com. As the shipping packages piled up over the proceeding days, I began to get worried again. What if something was defective? I ordered an extra Raspberry Pi kit and some spare parts to be safe. I also got a couple of soldering kits.

Everything was in and we were set.

As I rushed with facilities staff to get signs put up, get tables put together and extension cords and power strips in place, the teams were strewn about everywhere. All of the little details that are so easy to miss begin to rear their ugly heads. Did we have HDMI cables to connect the Raspberry Pis to monitors? Where were network cables? Could the wifi be setup without the network cables? Did anybody know how to solder? As each of these potentially fatal flaws in the plan got addressed I breathed a sigh of relief. The teams were working together, and everybody seemed to be making progress. I retreated finally to my own team, where they had successfully booted up our Pi to the welcome surprise of a Linux GUI (we were expecting little more than a command line interface). 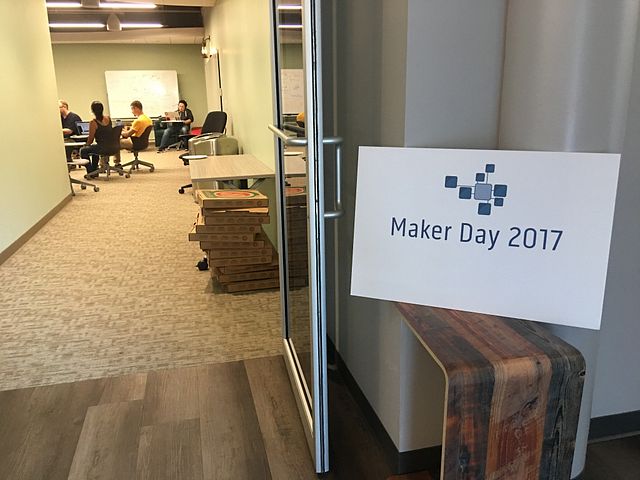 As the teams worked steadily throughout the day, there was a joyous noise of collaboration in the room. Most everybody seemed highly involved and engaged. Nobody came to me with a smoldering pile of rubbish. Pizza came at noon and the teams enjoyed a well-deserved break from things. Good thing too, I got feedback afterwards that some people were so engaged they would have skipped lunch otherwise!

Here is what the teams came up with.

Designed a system using a Raspberry Pi and a weight sensor that detects when the coffee machine has been emptied completely. It takes a picture of the last person to do this and posts it to Slack as a form of shaming. 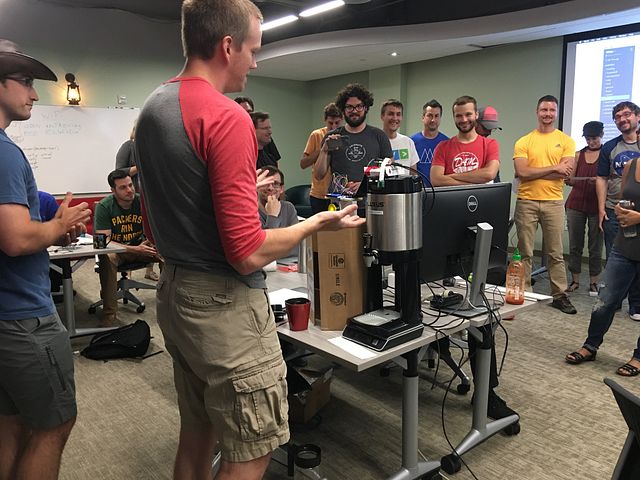 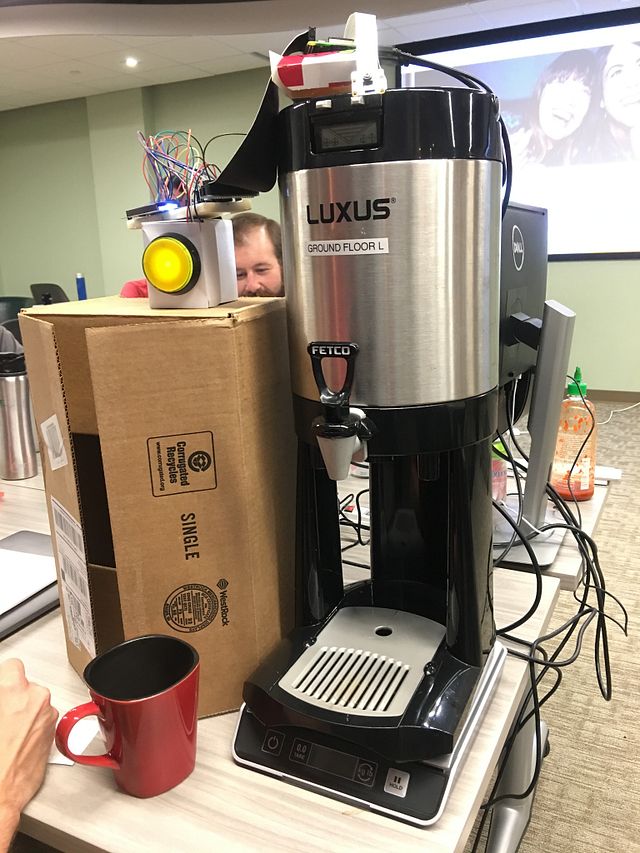 Created a Raspberry Pi-based system with a microphone for recording standup notes. After 20 seconds it starts making a long screeching noise to make the person stop (to keep the standup concise and to-the-point).

It then takes the voice input, feeds it into the Google Speech API to translate it into text, and then posts that to Slack.

Connected a Raspberry Pi to a 32x32 LED display designed to mimic a lite brite. Built a React-based web app to allow selection of colors from a palette to be placed onto the grid. Peg placements created events in Amazon SQS that a Python script on the Pi was listening for to light up the LED display. 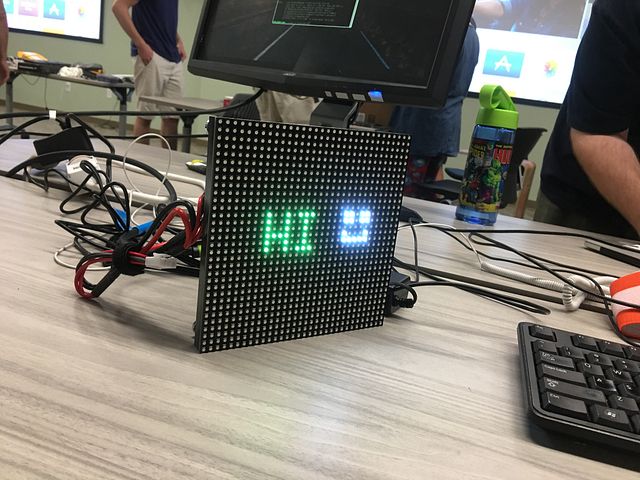 There was also a button on the web app that played Conway’s Game of Life on the display. 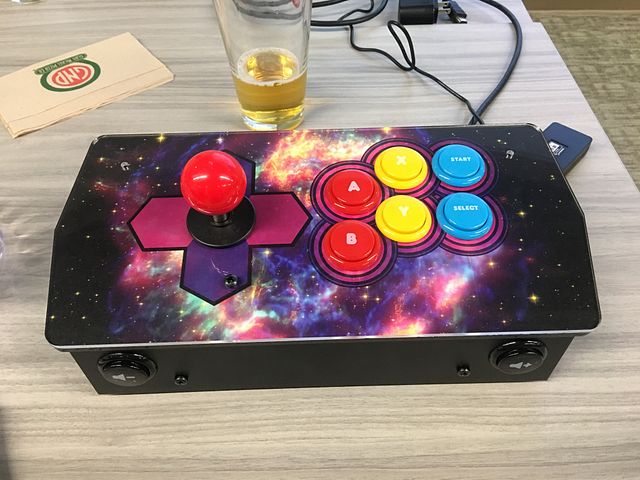 Created a system for determining when the keg was getting low or was out of beer using a Raspberry Pi connected to a Wii Balance Board, which measured the weight of the keg. When these conditions were reached, a message was put onto Slack to notify the person responsible for ordering kegs.

The Balance Board was too large to fit into the kegerator, so it had to be disassembled and the sensors remounted onto a board that fit.

Built a system of RFID cards for identifying employees and pulling up their picture when they swiped into the building.

After each swipe the system plays part of a Mario-themed song with a variation of tones based on the letters of the person’s name.

With demos complete, I collected the completed scoresheets and added them up. The winner?

For achieving this feat of maker prowess, each member of Team 5 was awarded an Amazon giftcard with the Maker Day logo.

I also sent out a survey to find out how the event was received by the group. Many people expressed in person that they had had a great time and that it was a great idea, but I wanted to make sure I had a good handle on the sentiment across the entire group.

I’m still waiting for more responses to the survey, but by and large the event was very well received, with a strong majority selecting the top rating of 5/5 as a team building exercise.

For those who did not find as much value, the theme seemed to be that not everyone had the level of coding or hardware skills where they felt they could contribute as much as others on the team. This will be good input to consider modifications for next year. So far 88% said we should host it again next year, so I suspect we’ll see its return.